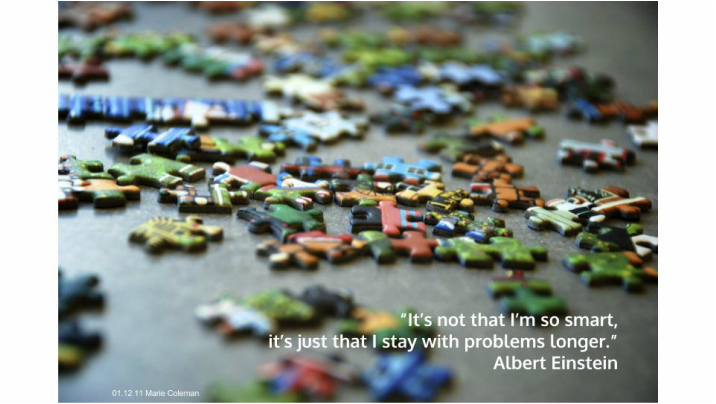 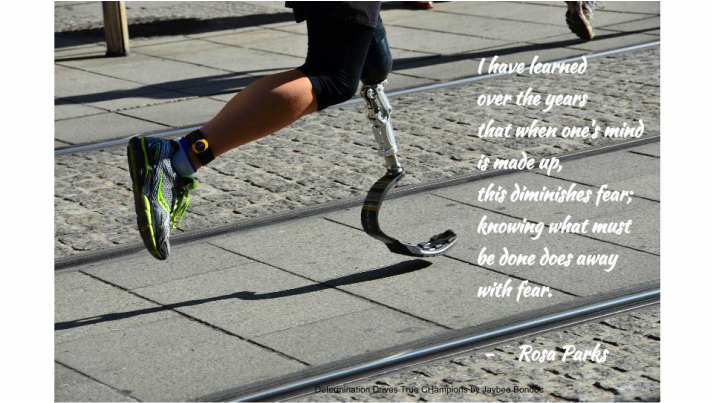 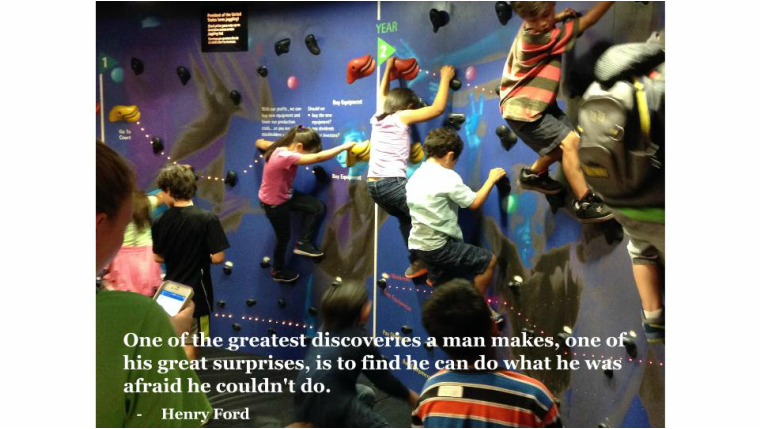 The idea that I am representing is Perseverance in Problem Solving. In my many years of teaching, one of the most frustrating things to see is students give up. I don't mean they give up after 10 or 15 minutes of working; I mean they give up after less than a minute. I felt that if students could just stick with a problem for maybe 2, 3, 5 minutes longer, it would greatly improve their ability to solve any math problem, or any problem in life, for that matter.

The first image, that of the puzzle, reflects this because one of the key components of perseverance is knowing where to start. Many students suffer from paralysis of choice when attempting to solve a problem and they would rather do nothing than choose an incorrect path. The scattered pieces of the puzzle is a very nice image of too many choices, without any bring made.

The second image, that of the one-legged runner, reflects the fear that students feel when they are presented with a word problem, or any difficult situation. Trying something new is always fearful, but it is in conquering this fear of failure that allows students to succeed, another key component of persevering.

The final image, that of the children climbing up the wall, reflects the result of perseverance. These children have faced their fear and chosen a path up the wall. Now, their confidence has increased through success and they will have little (or no) fear in the future when asked to complete a similar task.

I used GoogleSlides to create these images.

My big idea is Perseverance in Problem Solving. I wanted to show the before and after of students, where at first, they didn't persevere, and then after some work on honing their skills at perseverance, they became deeper thinkers. I searched for a video clip that showed students sitting, bored, in class, over which I planned on pasting thought bubbles which showed the different ways a lack of perseverance could manifest (e.g. fear of failure, not knowing where to start, etc.). Lucky for me, one of the videos I found actually had everything I wanted - students actually voicing what I needed them to say! Then, I edited the video down so it showed what I wanted: students who struggled at the beginning with perseverance, and students who were engaged and excited (and who persevered) about learning the subject matter. I then added comments and music (because it was a little dry without it, and I wanted it to have an uplifting ending).

I used Windows Movie Maker for this, and one of the tips I learned was how to put two captions on one clip of Movie Maker. Here are the steps:

Move onto Phase Two!
Powered by